Leading the Future of Community Health

You are here:
Uncategorized 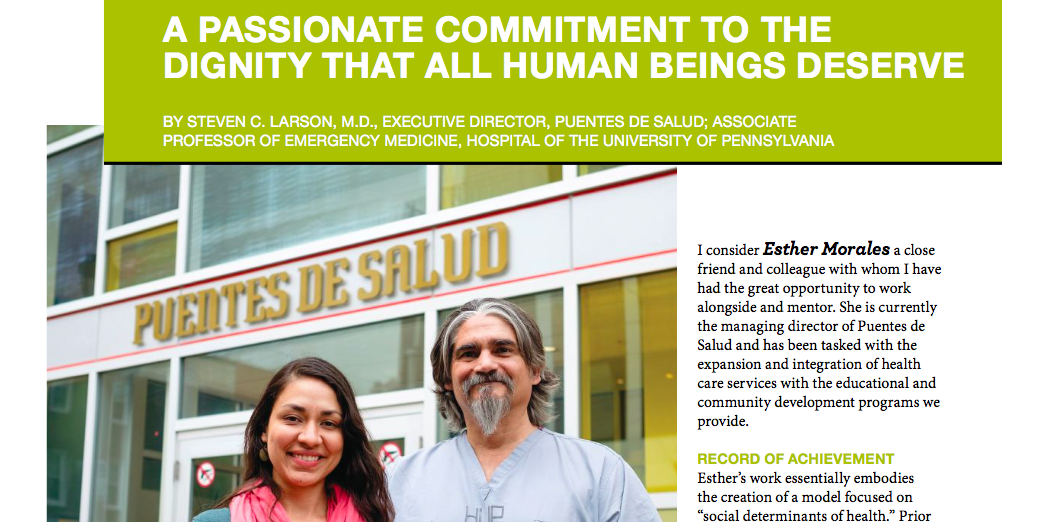 I consider Esther Morales a close friend and colleague with whom I have had the great opportunity to work alongside and mentor. She is currently the managing director of Puentes de Salud and has been tasked with the expansion and integration of health care services with the educational and community development programs we provide.

After demonstrating an innate ability for organizational management and leadership, Esther was asked to assume her current role as managing director, shepherding the growth of Puentes as it transitioned into its newly renovated center at 1700 South Street. When I think of Esther, the following words come to mind: quiet poise and grace, intellect, strength and honor, discipline, natural intuition, passion, dedication, and vision. When you first meet Esther, she has a natural poise and a grace that is entirely unassuming and immediately endearing. Within minutes of conversation, it becomes apparent that she possesses a keen intellect that complements the passion and dedication she brings to the job. Her personal life and work experience enable her to speak eloquently about the mission of Puentes and its vital role in the immigrant community. As you engage Esther in deeper conversation, it becomes quite apparent that she possesses a natural intuition for the work that is driven by vision. From the minute you first meet Esther, you realize that you are in the presence of someone who is disciplined and operates with clear core values that highlight inner personal strength and honor. She is no-nonsense.

Esther is an observer. When she takes on a leadership role, she spends significant time learning about the process that she oversees. Initially, she allows the junior leadership to operate without intervention. As she processes information and develops a clear understanding of the program, she begins to formulate a plan focused on growth and development. She is able to ferret out inefficiency and consistently applies a disciplined, thoughtful approach to improve productivity. Perhaps what makes her most successful as a leader is her ability to implement change in a quiet, goal-directed, disciplined fashion. The Texas Rangers have a motto that goes something like this: “A little man’ll whip a big man every time… provided they’re in the right and always keep a-comin‘.” Esther is the embodiment of this statement. As a leader, Esther’s passionate commitment to the dignity that all human beings deserve forms the moral compass that drives her actions to improve the community’s health and wellness.