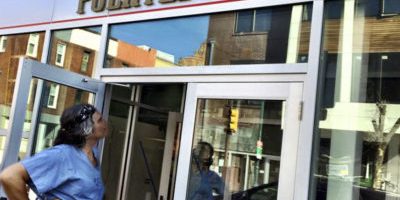 When discussing the beginnings of Puentes de Salud (Bridges to Health), Dr. Steven Larson, an emergency physician at the University of Pennsylvania, tells the story of treating a 17-year-old gunshot victim in his emergency room. Operating in a community with so many underserved individuals, he wondered what had systematically gone wrong to produce such an outcome. More importantly, what could he, as a medical professional, do to solve these problems?

As a young physician who spent time in Central America after medical school, Larson observed community health workers focusing on prevention, and wondered about the prevalence of immigrants coming to the United States and developing chronic illnesses. While caring for Latino workers in the mushroom fields of Kennett Square in Chester County, Pennsylvania, Larson recognized that Latinos in particular were underserved and often shut out of the mainstream healthcare system. For immigrants working in jobs requiring hard labor, an incapacitating or ill-managed condition could wreak havoc on an entire family—havoc further compounded by linguistic and cultural barriers, few health benefits and a lack of culturally-competent care.   In 2003, Dr. Steven Larson and Dr. Jack Ludmir organized a series of meetings with local stakeholders to address the healthcare needs of South Philadelphia’s Latino community. In Philadelphia, nearly three out of ten residents live below the poverty line.  Demographic shifts have been in motion since the 1990s due to economic instability in Mexico and increased labor demand in the United States. Today, nearly 30,000 Latino immigrants reside in Philadelphia. Furthermore, more than half of the visits to the eight city-run health centers are made by people with no health insurance.   The needs of the community are complex, and were being not addressed by existing programming at the time. Larson and Ludmir, joined by Dr. Matthew O’Brien, were acutely aware of this fact, and decided to design and build a new immigrant health and wellness center. The center would serve the needs of the city’s Latino population (and other minority groups), with an eye toward addressing the social determinants of health and long-term sustainability.   With this vision, Puentes de Salud was born. It started out as a “shoestring operation” with Larson, Ludmir and O’Brien seeing patients two nights a week in an office space at the University of Pennsylvania Medical Center. In a decade, the organization has taken flight, with nearly 5,000 patients seeking care and many more impacted through community programming.   The organization’s greatest strength in meeting the demands of patients has been its inclusive nature and interest in building diverse community partnerships. By involving medical residents and students, nurse practitioners, promotores (lay Latino community members who receive specialized training to provide basic health education), graduate students from various fields, and even undergraduate students in providing care and support services, Puentes de Salud has curated a conscious, innovative and holistic workforce. In return, it provides valuable experience and training for young physicians, nurses and health workers serving diverse populations.   In an effort to design sustainable, long-term strategies for health promotion and disease prevention Puentes de Salud has partnered with local public schools, universities, governmental institutions, nonprofit organizations and community members. Recognizing that long-term benefits to the population can only occur with sustained “upstream work” that will influence the lives of the city’s youth, the clinic started Puentes Hacia el Futuro (Bridges Toward the Future), an after-school enrichment program for kindergarten and elementary school children. The program is based at the Southwark School, where many of the students attend classes. Volunteers from various institutions work to improve the educational achievements of the children through after-school tutoring and mentorship, kindergarten in-class support, adolescent empowerment groups, a computer coding program, art classes and a summer literacy enrichment camp.   However, the program’s benefits extend far beyond the classroom. It provides youngsters the opportunity to interact with peers who are interested in their development and growth, and educates parents on the needs of their children. Clinic volunteers will often describe how mothers coming in for visits express concerns to physicians about their children’s education, and don’t feel like they are able to help their children with homework. By addressing the additional needs of the population through a joint effort at the school and in the clinic, Puentes de Salud empowers both parents and children to adapt, understand and excel.   For the medical community, such interventions are a powerful reminder of the importance of interdisciplinary action. The Puentes model treats education, capacity-building and empowerment as key pieces of the prevention puzzle—pieces that positively impact health outcomes in the long run. When conceptualizing the Puentes model, Larson, Ludmir and O’Brien held town hall meetings, health fairs and screenings that provided a forum in which community members could share their ideas on improving the health and wellness of the community. The learnings from these efforts—involving practitioners directly in the community and partnering to provide health and educational programs, has helped Puentes de Salud become an established leader in the community health landscape of Philadelphia.   As a leader, Puentes de Salud continues to make strides. In April 2015, the clinic moved into a new space, customized to accommodate the various programs occurring at the organization. Instead of two nights a week, providers are able to see patients throughout the week. The new environment enhances the ability of Puentes de Salud to function as a true medical home. Recognizing that access to medical care often gets patients through the door, the new site has a learning and education area where families can participate in yoga and ESL classes, GED certification courses, art classes, and other support and learning groups.   Puentes de Salud was started with a broader vision to break the cycle of poverty and meet the needs of a vulnerable population through customized programming. By providing opportunities for patients and community members to express their needs, and working across sectors to build programming, Larson, Ludmir and O’Brien have sought to address the social determinants of health in a way that truly makes a difference. The project began based on a physician’s moral and ethical responsibility to take care of patients in need, and what has occurred since can only be described as taking the fight for better health outcomes “outside of the emergency room and into the community.”   Written by Bhakthi Sahgal April 2016   http://philasocialinnovations.org/journal/articles/featured-social-innovations/826-puentes-de-salud-a-clinic-that-bridges-curates-and-empowers

Puentes de Salud is the 2015 winner of the Hispanic Choice Awards Community Advocate of the Year!
octubre 16, 2015

Explore Our Services
Ir a Tienda